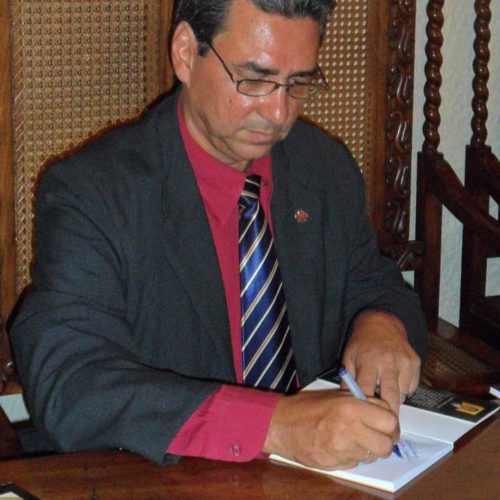 «You can go in peace!», finally said the priest Jesús, saying goodbye to the parishioners. The Nuevo Rosario church returned to its former condition of silence, sandalwood incense and darkness.

The priest Jesús had been practicing the priesthood for five years and he spent his last years as a seminarian abroad. Upon finishing his religious studies, he asked his superiors to transfer him to his town, where a priest was needed to pray for the souls of the living and the dead.

When he arrived at the town, the church was in total abandonment. It had been a long time since masses, confessions or weddings had been celebrated. With the efforts of all the residents, the broken benches were repaired, the cobweb was cleaned and the entire temple was painted. After all the work was completed, the Nuevo Rosario church opened its doors. Castile pigeons began to decorate it with their flights.

One of the priest’s friends was Jacinto, with whom he spent long hours talking about various topics, including: philosophy, history, politics and, above all, the subject of man’s evolution, undoubtedly the most debated.

—Listen, Father Jesus, ‒said Jacinto, ‒ according to Charles Darwin, we descend from monkeys and frankly, his arguments are true, until proven otherwise. Many scholars, philosophers, scientists, through their research have determined that it is the only truth related to man.

—No, Jacinto, those are pure concepts, ideas without foundations. We cannot ignore what our sacred scriptures say ‒replied the priest firmly‒. God said: “Let us make man in our image and likeness and as he saw him alone, from one of his ribs he created the woman.” That is what you have to believe.

“How do you prove it?” Jacinto asked insistently.

—The thing is not to prove if it’s true or not, but to believe that it was like that, to have faith, Jacinto, that’s all.

During the discussions the facial expressions changed colors. Each one defended his point of view: one, his religious mysticism, and the other, his Darwinian concepts.

“What I think will always be true, until the contrary is proven and proven,” Jacinto said.

-It is not like this! the priest raised his voice. You are completely wrong.

In short, little by little, those talks were disappearing. The priest Jesús continued with his routine performing weddings, confessing, officiating masses… he realized that something was not letting him sleep, an idea, something that filled him with insecurity. Those conversations planted in him a great confusion that kept him awake every night. He was spinning in bed like a top. He got up at dawn, walked in the halls trying to catch up on sleep, but nothing.

One of those nights, he decided to browse until exhaustion one of the many books that Jacinto had given him on the evolution of species, by Charles Darwin. On each page read, he smashed his eyelids, underlined important paragraphs, compared concepts, but the restlessness was there, always fresh. The roosters crowed. The sun crept slowly through the windows. A thread of light seemed to pierce the book still held by the priest Jesús, nervous and almost overcome by sleep. His vocation was in crisis.

Could it be true that we are descended from the monkey? he wondered. «I shouldn’t doubt my Christian principles, but Jacinto has entangled me with his absurd statements. I have to clarify this matter with him and end the anxiety ». He continued fighting with his thoughts, while his eyelids were confused with his large purple circles.

Troubled, he felt an urgency to contact Jacinto. He called him and he answered:

—I need to talk to you now, I urgently need to see you. I have to clarify some doubts with you because they have me sick ‒said the priest.

“It’s okay, father. Wait for me at the zoo at three in the afternoon, please, ‒Jacinto responded politely.

The zoo was located at the entrance of the town, it was small and did not house many animals. The priest arrived at three in the afternoon sharp. Half an hour later, Jacinto was not present. Another half hour later, there was no shadow of the one who was waiting either. The father grew impatient, walked from one side to the other, insistently looking at his watch, which was advancing inexorably. “He has to come, he has to come…”, he thought nervously. He continued to wait.

An hour and a half of waiting had already been completed that afternoon, when he was reached by a shout of gestures mixed with the movement of tree branches. From here to there, from there to here. In the coming and going, he suddenly found himself in front of the cage where a chimpanzee was walking calmly. The priest looked at him as if to strike him down. “You are the cause of my insomnia and my doubts,” he thought with his gaze fixed on the ape. When he raised his right hand to his face, so did the chimpanzee. He was puzzled. Then, he bent down to pick up a stone from the ground, and surprise!, the ape also imitated the movement. He scratched his head and so did the animal. With exactness, the caged chimpanzee repeated each of the priest’s movements. On the verge of a nervous breakdown, the religious human approached the primate and looked him straight in the eye, and said:

“Listen, you demon animal. If you say a word to me… Oh yes! If you speak to me, even if it is a word, I baptize you… by my holy mother who baptized you.

The visual contact of both beings was so penetrating that the swaying of the trees and the fatigue from sleeplessness, upon hearing that voice, fainted.

—Don Jacinto, we’ll have to wait and see how Father Jesus evolves. We must wait for him to come out of shock. Do you know what could have made a tremendous impression on him? the doctor finally asked.

—I don’t know if he was scared of something when he was in front of the chimpanzee at the zoo, doctor. Upon arrival, I stood behind his back and at the end of my sentence he collapsed.

That “Here is Darwin’s monkey” was withering for the priest Jesus. And the monkey kept eating bananas and swinging between the bars of the cage.