Luminescence: And what is that?

By Quitzé Fernández
November 25, 2021
Must Read 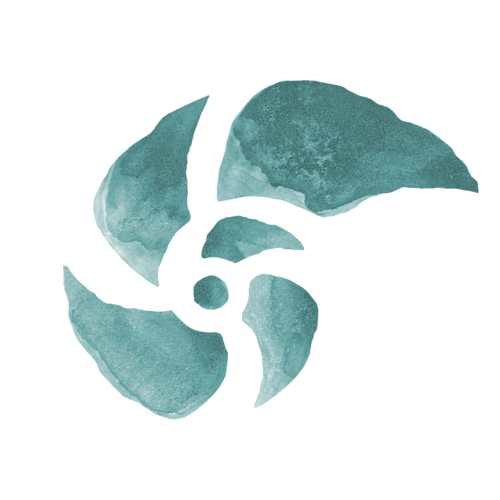 Luminescence is a phenomenon that occurs in nature, but it can also be caused. It is the principle behind LED lights, which are a sustainable alternative against climate change.

Months ago, I was watching the news on television while eating breakfast. In one section, they shared a series of videos that various people recorded in which it was seen how the sea turned a bright blue color. This attracted a lot of attention and some experts commented that it had been a phenomenon of luminescence.

Dr. Kora Lu Rojas , a researcher at the Center for Nanosciences and Nanotechnology , explained this during the conference: “Luminescence: And what is that?”, Presented during the National Meeting of Scientific Dissemination. This phenomenon occurs when a crystalline solid absorbs energy from some excitation source and converts part of that energy into electromagnetic radiation.

Luminescence is a form of “cold light” that does not depend on the high temperatures of a material, but is caused under ambient or low temperature conditions.

Different luminescence
During the talk given by Dr. Kora Lu Rojas mentioned that there are various types of luminescence, which are obtained from various chemical, physical or biological processes. These are:

And how do you get the light?
In order to obtain light, a process known as a “crystalline lattice” is carried out, for which a luminescent material is required, the crystalline solid in which luminescence occurs.

Dr. Lu Rojas explains that there are various factors necessary for this process to take place.

The first is to have an activator, which is responsible for the luminescence in the material. Then, the excitation energy is needed, in this case it can be the light of the lamp or whatever is causing the luminescence. Subsequently what it does is absorb it and once it absorbs it, energy is released as vibrations of the network and photons , which is the light that we can see. 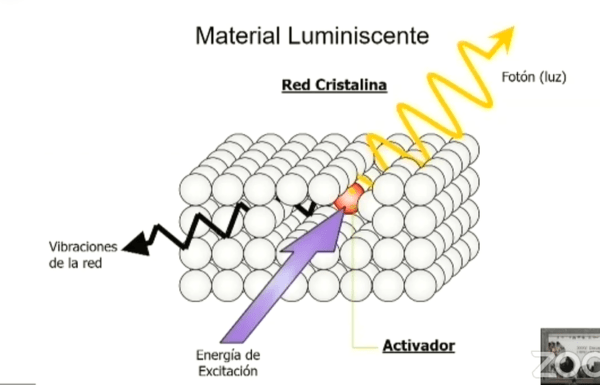 If you remember your high school or high school classes, in the periodic table we have a section that is lanthanides. “When we synthesize or manufacture a luminescent material in the laboratory, we use lanthanides as materials, they are the ones that will act as an activator or sensitizer”, says Lu Rojas.

These types of elements are also known as “Rare Earths”, because they are difficult to obtain in a pure way in nature since they are mixed with something else. 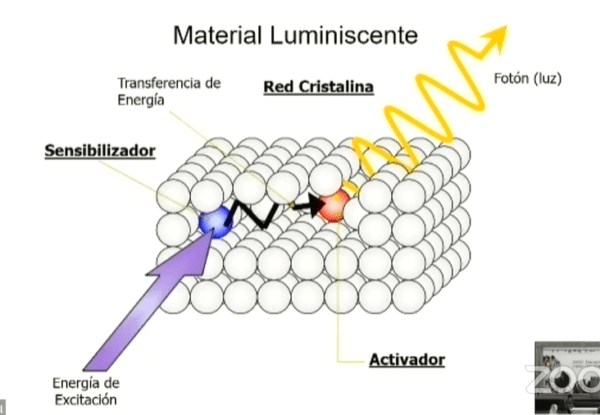 But … what are luminescent materials for?

The luminescent material helps us to observe the emission of light. We can see this applied to screens, lighting, laser pointers, laser for ophthalmological surgery, nanothermometers, bio-taggers, scintillators and to reduce skin hyperpigmentation.

The advances have basically benefited the medical area, however, research continues to achieve better lighting and above all that less energy consumption can be generated to benefit the environment.

Betting on LEDs to fight climate change
In the world, 18.88 percent of the energy generated is electricity, 10.49 percent is obtained from coal and 40.86 percent is created from petroleum derivatives and only 0.5 percent comes from sustainable energies such as the wind or the sun.

LED-based lamps already represent an alternative to conventional lighting. Which means a great energetic change of human beings. There are enormous advantages with the use of LEDs, since they generate low energy consumption, they are of high efficiency, the life time is long, they are more durable, they are less toxic because they do not contain mercury, they are compact and different forms of design.

LED lighting has already exceeded the luminous efficacy of other previous sources such as incandescent or halogen, “and it is expected that under a sustainable development scenario this will increase, so let ‘s bet on LEDs “, concludes Dr. Kora Lu Rojas.